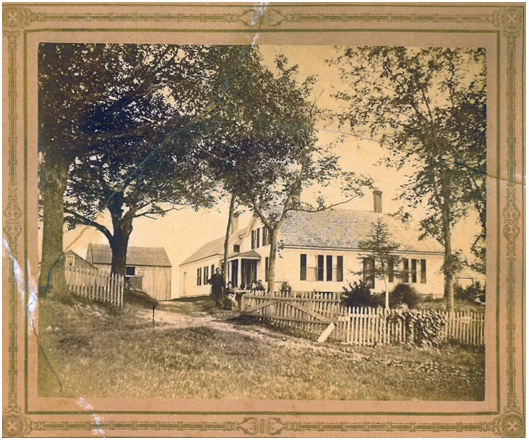 The “mystery house” has been identified! Dana Sturtevant and John Willey recognized it as the house located on the right as you start up the hill heading north on Rte. 8/11, the Oakland Road, just beyond its intersection with Cemetery Road.

The house was built prior to 1818 by Eleazer Burbank, who was born in Scarborough in 1764. Early in the Revolutionary War, Eleazer’s father, Silas Burbank, enlisted as a 1st Lieutenant, bringing along his two young sons, 13 year old David, a drummer, and 11 year old Eleazer, a fifer. They were assigned to the 12th Massachusetts, since Maine was part of Massachusetts at that time, and after marching to Boston, they served under General Washington in the siege of Boston. The Scarborough Regiment was the first to march into the city after the British evacuation. 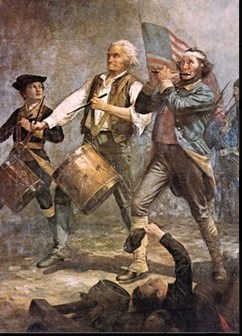 The Burbanks next marched to reinforce Fort Ticonderoga. In 1777, Silas was promoted to Captain, and he is credited with leading a fourteen day march to Bennington, VT that ended in a victorious battle. Later they took part in the battle of Saratoga. In 1778, the troops moved to Pennsylvania, where their winter quarters were 20 miles outside Philadelphia at Valley Forge. Although in dire want of food and clothing that winter, the American army miraculously held together, and the Burbanks later fought in the battle of Monmouth. The remainder of their service was protecting West Point before retiring from the army on January 1, 1781.

At one point during the war young Eleazer was captured and held prisoner for a month.When the English soldiers asked him to play for them on his fife, he responded by playing Yankee Doodle, much to their amusement. 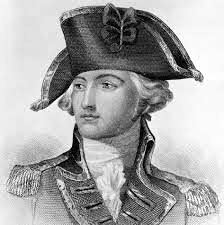 During his service in the war, Capt. Silas Burbank was one of the officers chosen to lead Major John Andre out to execution. Andre, the British spy, was hanged for his ill-fated conspiracy with Benedict Arnold to crush the American fight for independence. He blundered into American hands carrying Arnold’s plans for an attack on West Point, and under Washington’s orders, Andre was hanged  on October 2, 1780 . 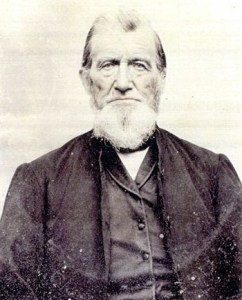 Returning to Scarborough, Eleazer Burbank married Mary Brackett in 1788. After five of their eventual eleven children were born in Scarborough, the Burbank family pulled up stakes and moved to Belgrade with a six-ox-team in 1798-99. Deed records show that in 1800, the year Thomas Jefferson was elected president, Burbank purchased 100 acres with no mention of any buildings for $75 from Robinson Mills .

We know that Eleazer Burbank served as Belgrade Town Treasurer in 1808. He was a devout Quaker, and donated land from his farm to the Society of Friends for a meeting house and burial ground. He got into trouble with his pacifist Quaker congregation, however, when in 1818 he accepted a war-service pension of $96/year for his role as a musician in the Revolution. The Quakers promptly dropped him from membership. Later on, Mary Burbank received a widow’s pension of $88/year.

The Quaker cemetery is located on Routes 8 / 11 in Belgrade across from the Pine Grove Cemetery. Trees have grown up in it, but a pipe fence still marks the little plot. The Society of Friends’ Meeting House once stood nearby. It was later moved to be used as a barn, and possibly the remnants can still be seen just north of Joseph Taylor’s stone house, near the Taylor Woods Road.

You may go to a listing of those buried in the Quaker cemetery at the bottom of this webpage.

After purchasing the property in 1800, Eleazer must have gotten busy building a house for his family, because in 1818 when he sold the farm to his eldest son John Burbank for $1, the deed described the property as “located on the road that connects the Kennebec River to the Sandy River, and having a dwelling house and barn thereon.” In 1846 John Burbank married Emily Avery. He is buried in the Quaker cemetery on the farm property. 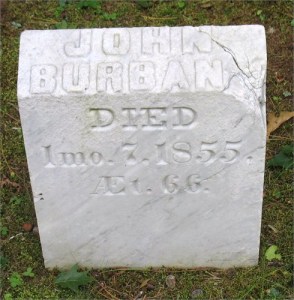 A few years after John Burbank passed away in 1855, the farm was sold to Greenwood Cummings, who moved his family there from Sidney in 1858, just prior to the Civil War. Cummings’ daughter Vesta married Albion R. Chase, a grocer in Canaan, ME, but after Albion passed away in 1889, Vesta and her small son, Clarence, returned to Belgrade to live with her parents.

Greenwood Cummings died in 1900, and his probated will bequeathed the homestead, which had grown to 150 acres plus a 30 acre wood lot, to his wife, Harriet N. Cummings. Later that year the census taker found the following people living in the house: Harriet Cummings, age 80; her unmarried daughter Hattie M. Cummings, age 43; her widowed daughter, Vesta Chase, age 51; and Clarence Chase, age 14. Young Clarence had become the only “man in the house” for his elderly grandmother, mother, and maiden aunt. 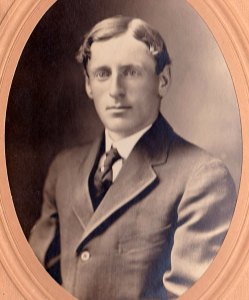 Clarence Chase was a member of the first class to graduate from Belgrade High School in 1908. Early Waterville Sentinel articles tell us that class treasurer Chase was captain of the high school baseball team and was cast in several roles in the Drama Club’s presentations. He was a skilled fisherman, judging from the following bit of Belgrade town news of May 23, 1912:

“Talk about fishing! Well, that is what you would do if you had been fortunate to partake of a luscious big trout, a Speckled Beauty weighing 6 ¼ pounds caught in Messalonskee Lake Friday morning about 4:30 by Clarence P. Chase of this town. The fish was quite a gamey fellow, so there was a battle between captor and prey for a few minutes, but Mr. Chase, being adept in this art, landed his prize with a dip net.”

On his 1918 draft registration during World War I, Clarence Chase described himself as a farmer living in Belgrade. It appears the war ended before Clarence was called up. A few years later, in 1921, he married Eva Yeaton, and the Burbank house became their home. They had no children. 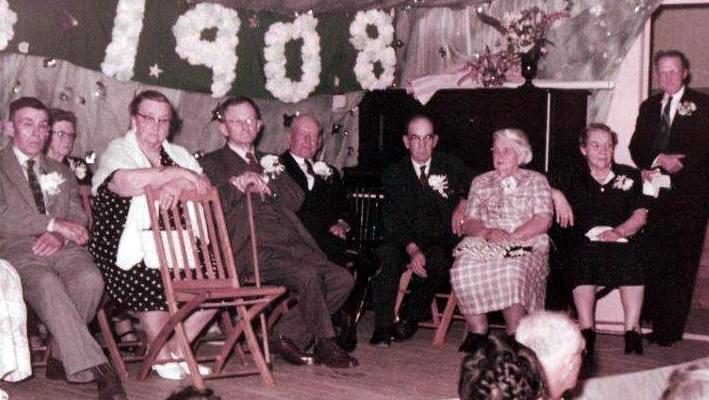 At the 50th reunion of that first Belgrade High School graduating class in 1958, Clarence Chase is seated fifth from the left. 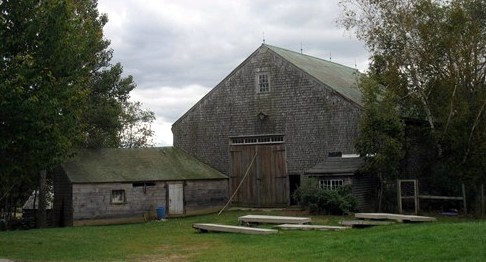 Clarence Chase carried on the tradition of selling milk from his herd of Guernsey cows and raising produce on the farm. Many remember his vegetable stand at the east end of Pine Grove Cemetery on Route 11. Always a well-liked man, Clarence served as Master of the Belgrade Grange. 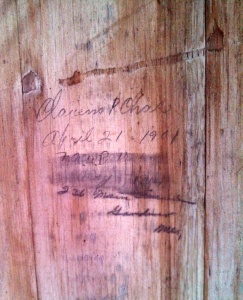 Clarence Chase left his mark within the old Burbank barn on April 21, 1901. 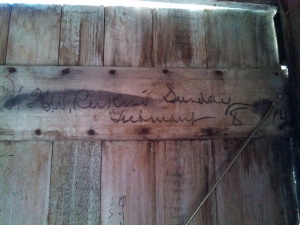 Another barn “autograph” was left  by F.K.W. Perkins.

The Chases’ niece, Bessie Dyer, inherited the farm after Clarence Chase passed away in 1974. At some point Rene and Katharina Burdet learned that a charming old farmhouse with two lovely barns, acres of fields and forest, and access to Messalonskee Lake was for sale. They purchased the property from Mrs. Dyer and named it Sunny Hill Farm. 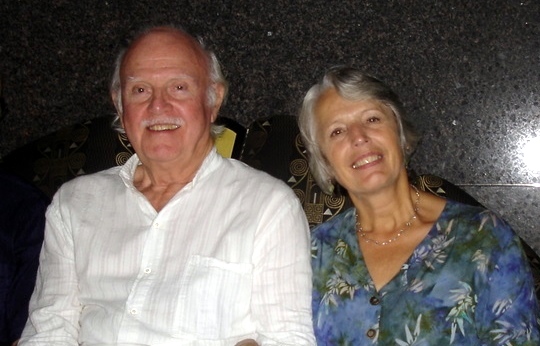 The house had been vacant for several years when the Burdets purchased it in 1983. 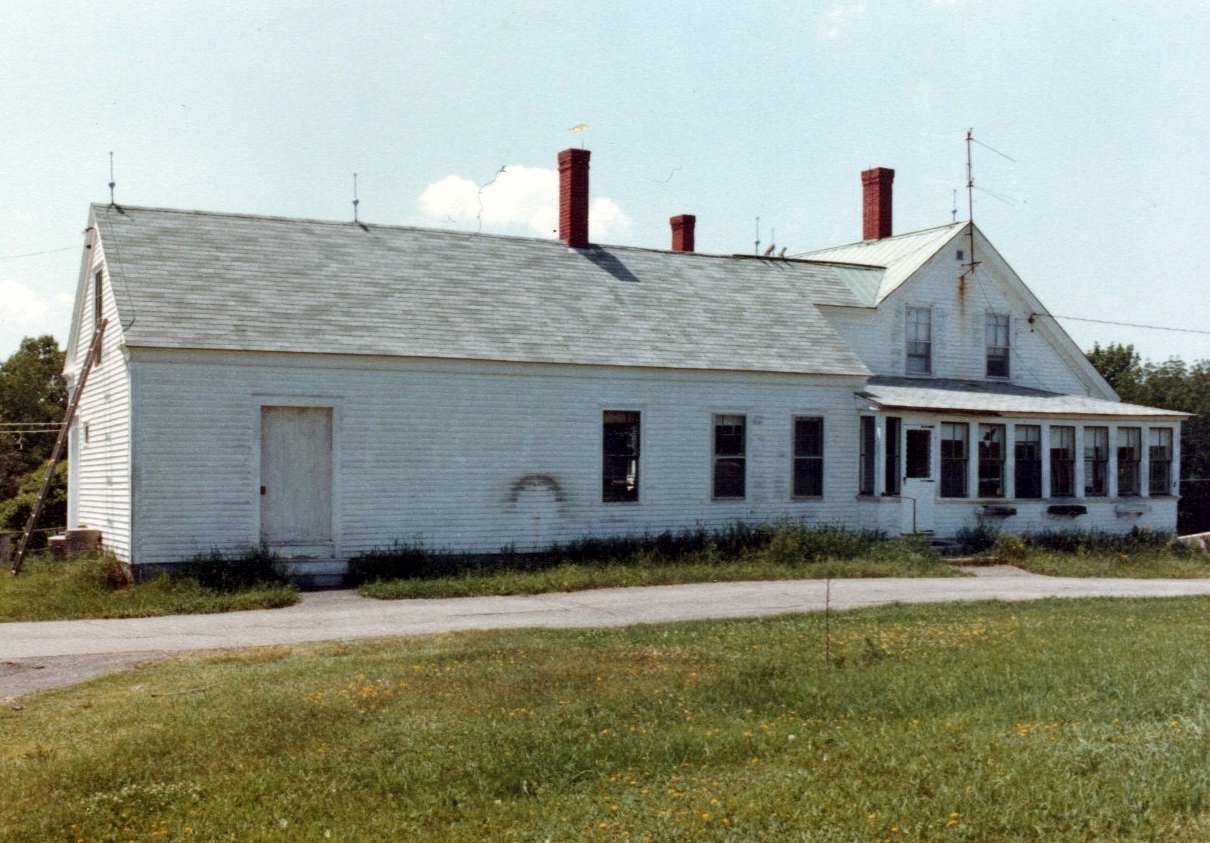 Rene Burdet was a former residential designer and contractor who had the expertise to take on a major renovation of the house. In order to provide them with a splendid view of Messalonskee Lake and the farm’s rolling fields, an ell on the back of the house was moved 90 degrees northward. Rene remembers how close the project was to disaster when a hurricane came to town at a time the building was on stilts and blocks during the move. Fortunately it wasn’t toppled, but there was some damage from water coming in under the unfinished roof.

Moving the ell on the Burbank house 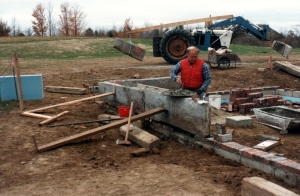 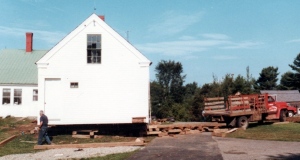 In the mid-1990s, the Burdets added a dormer with a new bathroom to the house, making it even more comfortable. Another project was the building of a grass air strip for Rene’s plane, which required the clearing of a strip of woods at the bottom of the field. This providing a view of the lake from their new porch.

The Burbank house under the Burdets’ stewardship in 2001 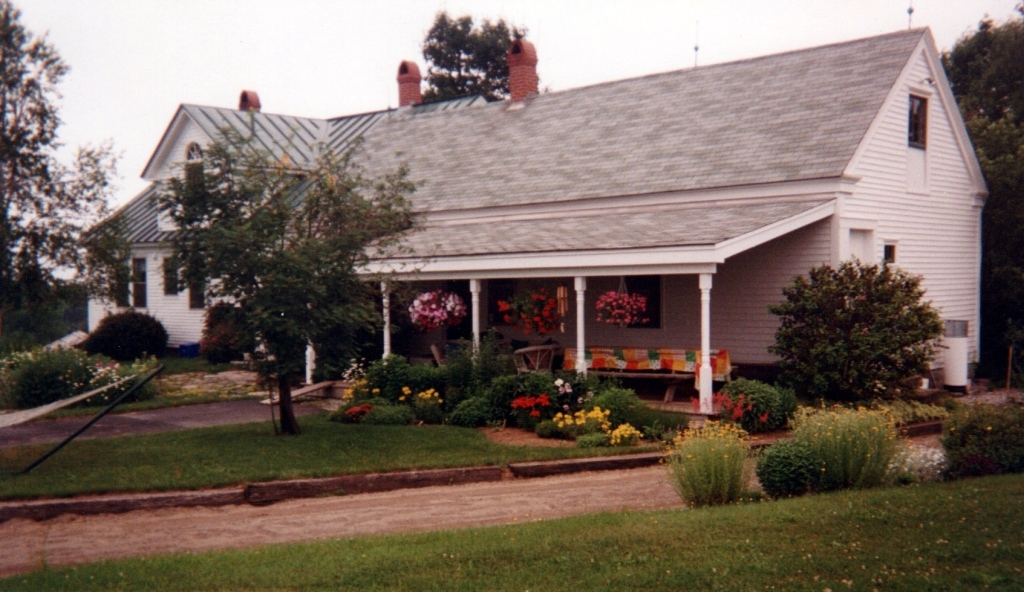 In 2004, Chance and Leilani Carlson bought the Burbank House, and over the last ten years, a number of improvements have been made. In addition to improving insulation, updating wiring, and replacing windows, the Carlsons skim coated and painted several of the original horse hair plaster walls. Big changes were made to create an open floor plan for the kitchen, living room, and dining area. 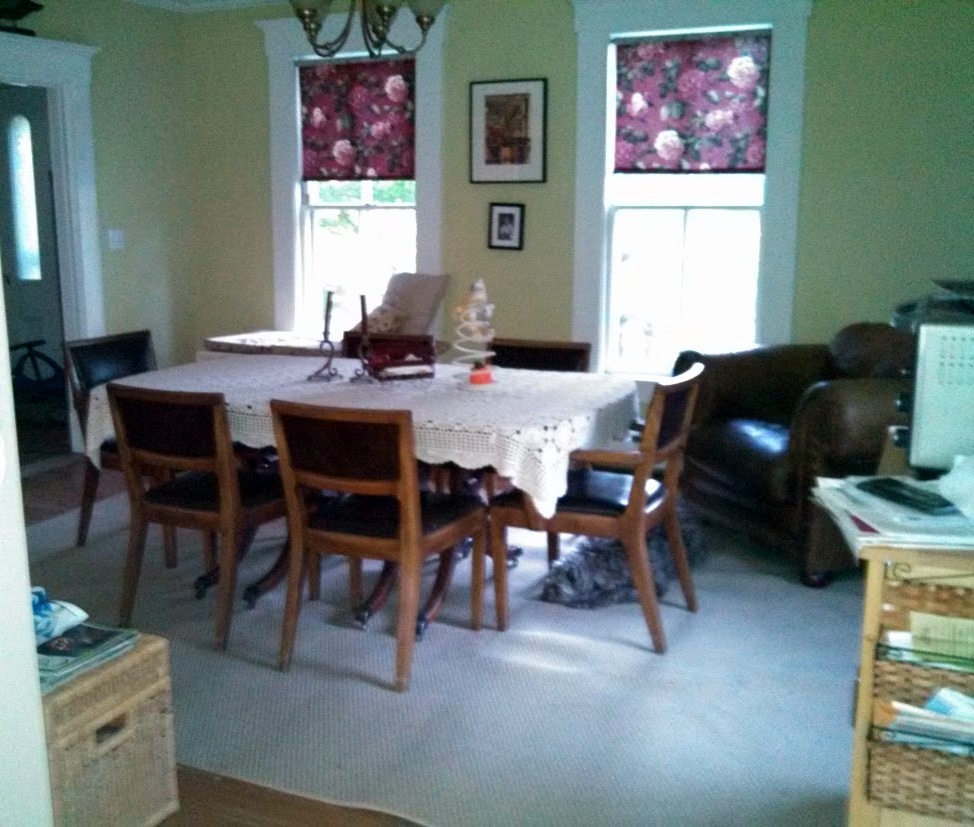 Upstairs, the house now has two guest bedrooms in addition to a master bedroom. As part of the work upstairs, the timber frame of the house was exposed, revealing some charred beams. This leads to conjecture of a possible fire in the house’s past. If only the walls could talk! 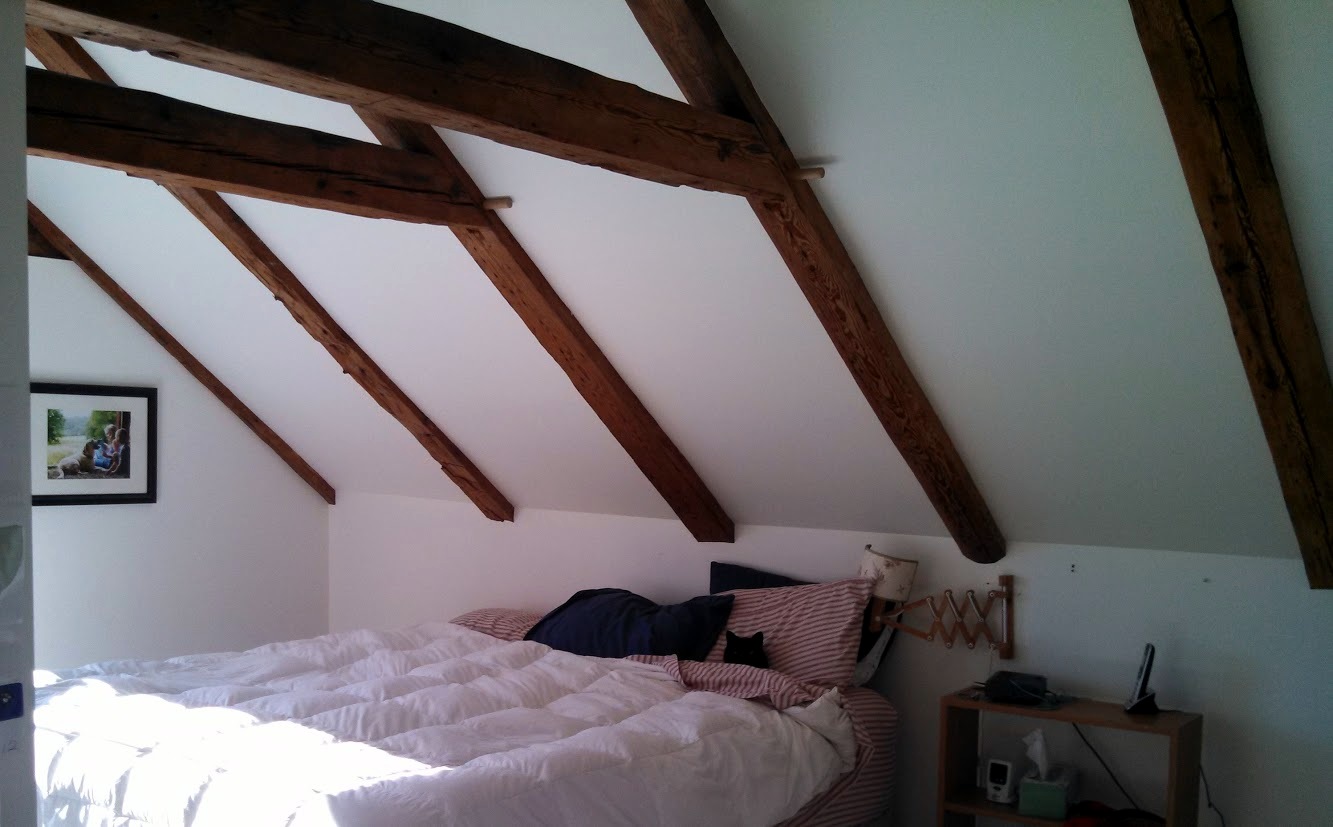 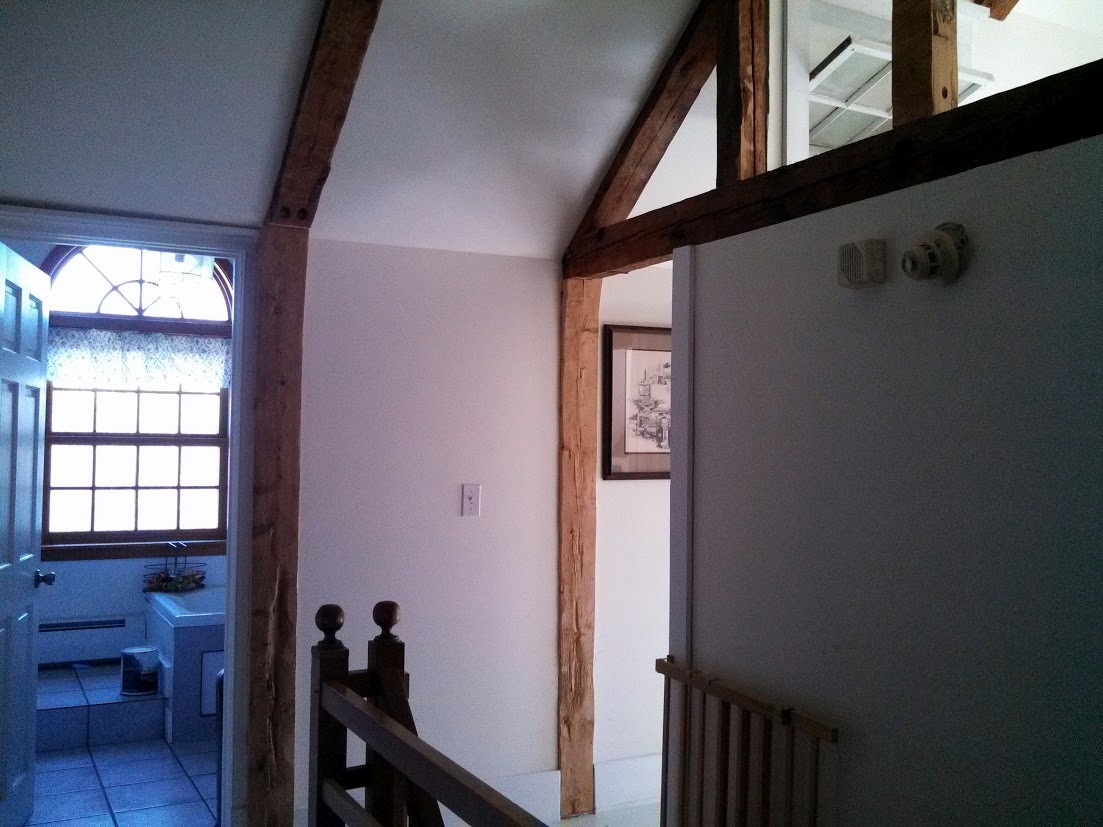 To top off the home improvement projects, the old porch off the back of the house was replaced with a raised farmer’s porch. Chance Carlson, at 6’4”, decided he’d hit his head on the 6’ beams once too often. 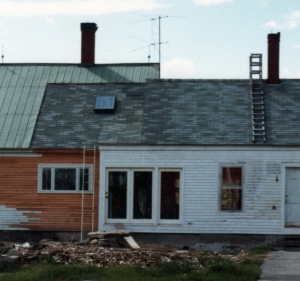 Please note the smaller, more traditional windows put in place by the Carlsons.

The property is now called Heritage Hill Farm, and for four years the Carlsons managed it as a small Community Shared Agriculture (CSA) farm, offering beef, chicken, pork and veggies.

A few years ago, the apple expert, John Bunker, visited the Carlsons to see an ancient apple tree near the dairy barn. He said that the noted Belgrade orchardist Joseph Taylor had grafted a portion of Eleazer Burbank’s tree to create the Zachary Pippin apple, named in honor of then President Zachary Taylor. Joseph Taylor introduced the new apple in 1852. On his visit, John Bunker removed some scion wood from that old tree in order to graft it and produce new trees. The Carlsons have named their tree the Burbank apple tree in honor of the original owner of the farm.

The Eleazer Burbank house has been a presence above Lake Messalonskee in Belgrade for approximately two hundred years. Thanks to the care of various owners over its lifetime, the house is in excellent condition as it begins its third century.