Discovering the early history of Lakeside ca. 1880-1898 became possible as a result of two special gifts that the Belgrade Historical Society received. First, member David Yeaton donated a flatbed scanner that makes sharp copies of photographs. The clarity of images reproduced from scanned photos encouraged other BHS members to lend us their old photographs of people and places in Belgrade to scan and keep in our collections. This article is the result of the second gift, a rare collection of labeled tintypes and glass plate negatives with explanatory notes from the 19th century, all pertaining to the extended Richardson family that resided near the former North Belgrade train station on Station Road along the shore of Lake Messalonskee.

In the 1940s, a family that had purchased the old Richardson/Williams home discovered the collection of images in the attic. Subsequently, an older acquaintance, who had grown up during the 1880s and 1890s with the children in the photographs, wrote extensive notes identifying many of the individuals, all of whom had died or moved away from Belgrade by the 1950s. The glass plate collection remained safe in that house as a precious record of the past, and in response to Margaret McMorrow’s request, the current family agreed to let BHS make photographic images of the tintypes and glass plate negatives for its own collection.

The first railroad station at Lakeside in North Belgrade came in 1849. 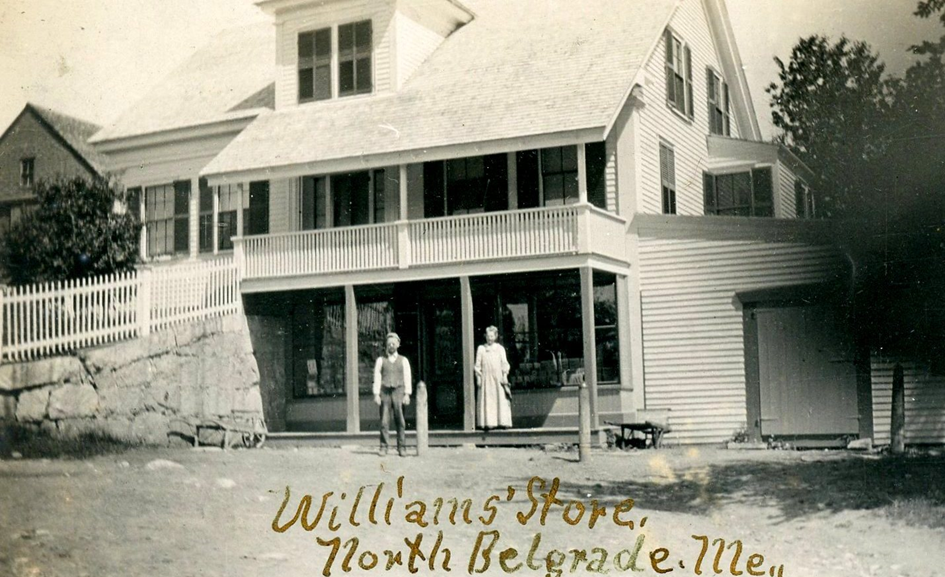 Image courtesy of Sandy Leibfried
This Alice Manter photograph displaying her characteristic hand-printed caption shows Fred and Rosa Richardson
Williams in front of their store at Lakeside after it was passed on to them by her father, Charles Richardson. 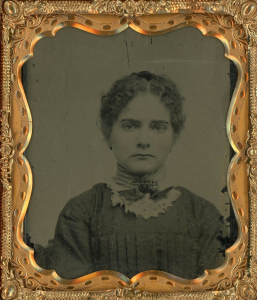 Charles and Aurinda Richardson became the parents of eight daughters and one son. The eight daughters married into eight different Belgrade families, but the three daughters of interest for the Lakeside community are Flora (b. 1850), Ella (1854-1910), and Rosa (b. 1857). Flora Richardson married Artemis J. Butterfield ca. 1871. The Butterfields seemed to have moved periodically within Maine, and even between Maine and Massachusetts, apparently in search of non-farm employment, which was a common pattern in the late 19th century. They frequently returned to Belgrade, especially in the summers. The youngest of their four children, Joseph Howard Butterfield, was born in 1877 when the family was living in Aroostook County.

Ella Richardson married Frank Judkins (b. 1853), a local lad, whose Judkins grandparents had moved to Belgrade from Readfield in 1827, when Frank’s father was a boy. 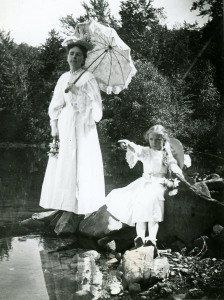 According to an accompanying note, this picture is of Rosa Richardson Williams with her young niece, Nina Judkins.

In the 1870s, Frank got a job in Waterville with the Maine Central Railroad, which was developing its rail car repair facilities there.
The North Belgrade station had been operational for over 20 years by then, so he could have commuted daily into Waterville on the train, or he may have stayed in Waterville during the week. Whatever his schedule, Frank found time to court Ella Richardson, and they were married in 1877.

Two years later, the Maine Central Railroad sent Frank Judkins to North Belgrade as its company agent (station master). We do not have a record of where Frank and Ella lived after they were married – in Belgrade or Waterville—but we may assume that Frank sought the position of station agent when it became vacant in 1879. 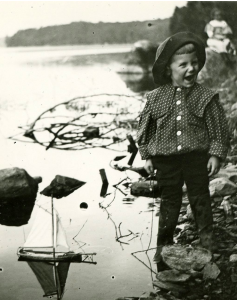 This could be Nina Judkins younger brother, Wilbur Judkins (b. 1884).

At that time, Frank and Ella had a year-old son, Lester, and all four of the boy’s grandparents lived in Belgrade. The young family settled into a house across the road from the Richardson’s home, which was within easy walking distance of the North Belgrade station. Their daughter, Nina, was born in 1881, and in subsequent years two more sons were born there.

Rosa Richardson (1857-ca. 1935) married Fred Williams (1858-ca. 1935) in early 1881; their only child was a son, Percy Williams (1882-1973). The young Williams family was welcomed into the home of Rosa’s parents, the Richardsons, since the house was large enough to contain two separate living quarters as well as the store. 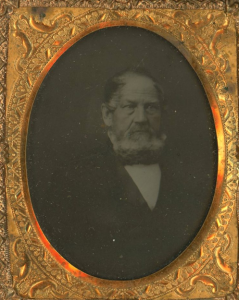 How did Fred meet Rosa Richardson? At this time, young men were taking day trips to the North Belgrade train station, where they would disembark to enjoy picnics along the shore of Lake Messalonskee and to fish. We can speculate that Fred met Rosa in the Richardson store, where the day tourists would stop to get food and fishing gear. Dare we imagine it was “love at first sight,” or at least as they got to know each other over commercial transactions, they got to like each other? After they were married, Fred moved to No. Belgrade and worked  in the store with his father-in-law, gradually assuming more responsibilities for sales and management. 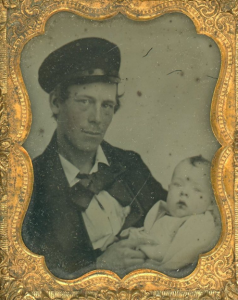 The glass plate negatives reveal that the Richardson home seems to have been a center for the Judkins-Richardson-Williams clan, and the Richardsons seemed to have been involved with their grandchildren: Lester, Nina and Forrest Judkins, plus baby brother Wilbur, born in 1895; Percy Williams; and Joseph Butterfield, who was there at least in the summers during this period.

Someone in the clan was seriously interested in photography, given the number of glass plate negatives and the cost of photography, which was then dominated by professionals. Photographs from this era only rarely included children. 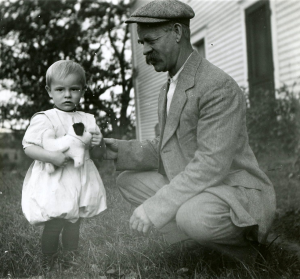 Fred Williams with his only child, Percy Williams, who became the North Belgrade railroad station agent in 1910.

But the Lakeside photos include Nina Judkins, ca. 10 years old, posing by the shore of Lake Messalonskee; Percy Williams as a toddler with his father and  as a ca. ten-year old playing a banjo; and an unidentified toddler girl sitting near a mother cat and her kittens.

It is plausible that brothers-in-law Frank Judkins and Fred Williams may have shared an interest in photography, and used this medium to document their children as they grew up. The picture on the right, so clear in its detail, was taken in 1883, and is reproduced from a glass plate negative.

Of particular interest are the photos taken over a ten-year period of Percy Williams, because they allow us to see his maturation from a curious toddler to a playful boy and then to a serious preteen who loved to go fishing with his dad. Furthermore, all the photographs seem to have been taken during the summers, the very summers when Lakeside, along the shores of Lake Messalonskee, as well as other lakefront areas in Belgrade, was developing as a summer tourist destination. 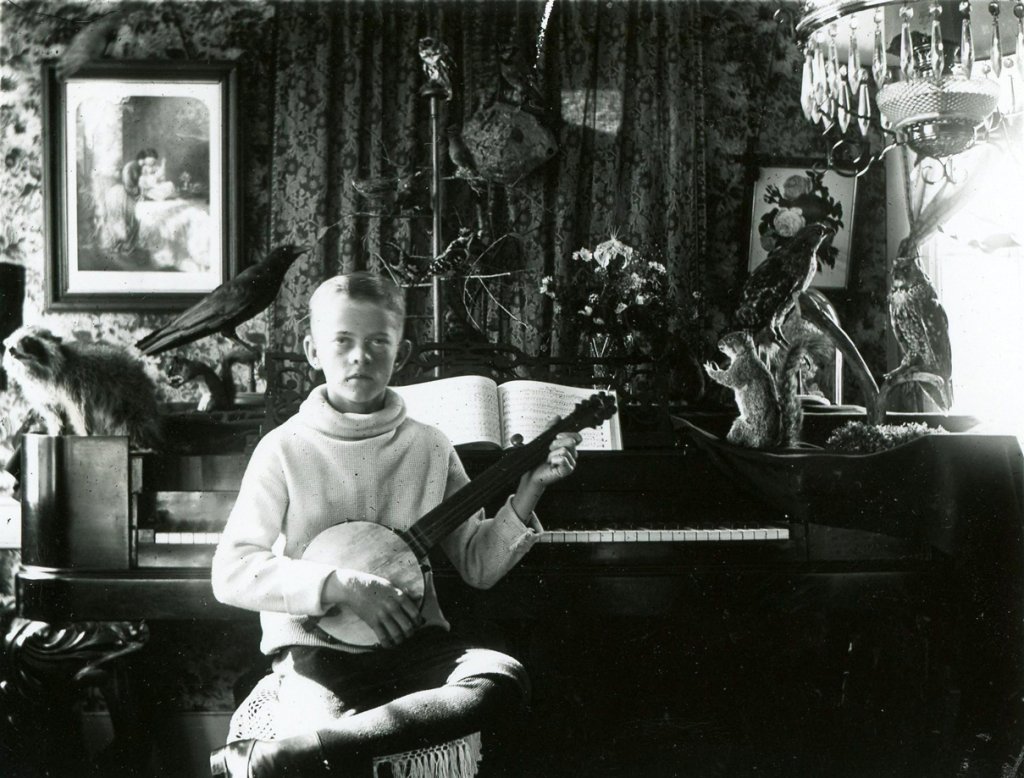 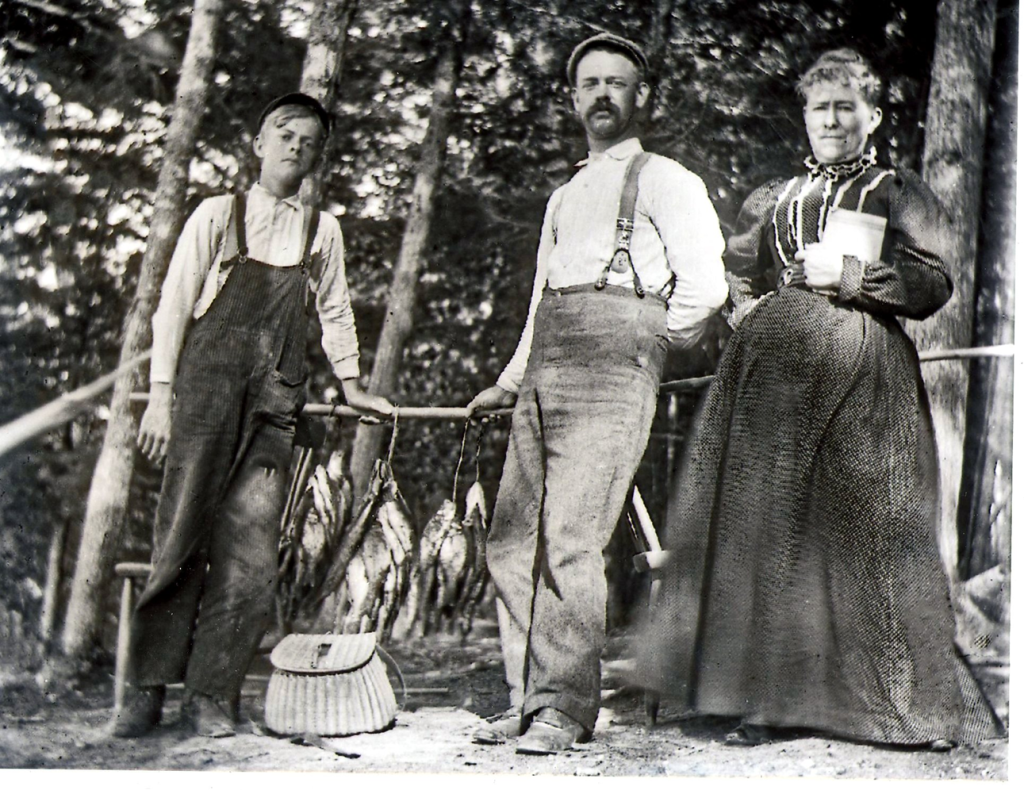 Showing off a day’s catch from Lake Messalonskee— Percy Williams and his dad Fred Williams,
along with Percy’s grandmother, Aurinda Richardson (wife of Charles Richardson) 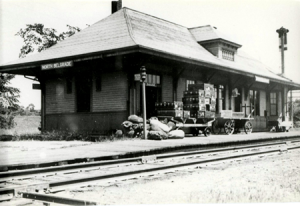 This station building replaced the original one built in 1849.

We know that Percy Williams worked with his father in the grocery store in the early 1900s, but he also must have had a job working for the Maine Central Railroad, for in 1910, he was appointed as the station agent in North Belgrade. He also got married that year, although I have been able to find only the forename of his wife, Emma. They became the parents of two children, Roger (b. 1911) and Reba (b.1915). Sometime between 1915 and 1918, the Maine Central Railroad transferred Percy to Newport, Maine, where he was the railroad’s telegraph operator for many years. Percy practiced that profession until the 1930 census finds him in the grocery store business, reminding us that advances in technology had made the telegraph obsolete. The family settled in Newport, buying a large house on Main Street. Percy Williams passed away in Newport in 1973, aged 91. Hopefully he never lost his love of fishing. after leaving Lakeside.

Another view of the second railroad station built at the Lakeside location in North Belgrade. In the 1950s, after Maine Central Railroad passenger service was terminated, the station was moved to the intersection of Station Road and the Oakland Road, where it was transformed into the interdenominational Faith Community Church. Today it is the North Belgrade Baptist Church.

There are no photographs after 1897, and consequently, I personally was left with a strong curiosity to learn what happened to these families at Lakeside, especially two of the children, Nina Judkins and Percy Williams. This information was more difficult to find, as there was no trace of either Nina or Percy in Belgrade after 1918. It took nearly three months to piece together the many scattered bits of information gleaned from 100-year old newspaper articles, archives of vital statistics, census records, and obituaries. Several times Linda McLoon sent me items she found on genealogical websites, and these all provided clues that enabled me to figure out, for example, that a certain person was an adult Nina or Percy.

After Joseph Butterfield returned from a U.S. Navy stint (1899-1903) as an ordinary seaman during the Spanish American War, he and his maternal first cousin, Nina Judkins, were married in 1905. For about ten years the couple shared the Judkins’ large house across the road from the Richardson’s, and operated a store in part of it.

In a scene that shows the first railroad station at Lakeside with Lake Messalonskee in the background, the Richardson/Williams home is on the left and the Judkins/Butterfield house is on the right (no longer standing). A note informs that the Judkins home had a dance hall on the second floor, where during the “old cider times” things on occasion got rough. Frank and Ella Richardson Judkins lived on the first floor under the dance hall, and Nina and Joe Butterfield had a store on the westerly side of the building. 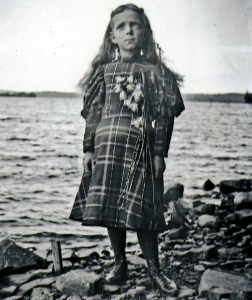 Nina gave birth to a set of twins, Joseph F. Jr., and Cassie F. Butterfield, in 1906. About 1915, the family moved to western Oregon, where they bought a farm and eventually established a flower blub business. A 1931 Portland, OR directory lists Joseph H. Butterfield as having a business named Ninaville Bulb Gardens. After Joe Butterfield died, Nina’s son, who went by his middle name, Howard, continued to help his mother operate the bulb farm.

Nina passed away in Oregon in 1970 at the age of 88. Hopefully, she never lost her love of nature and the water that she seems to express in her childhood pictures taken at Lakeside by Lake Messalonskee. 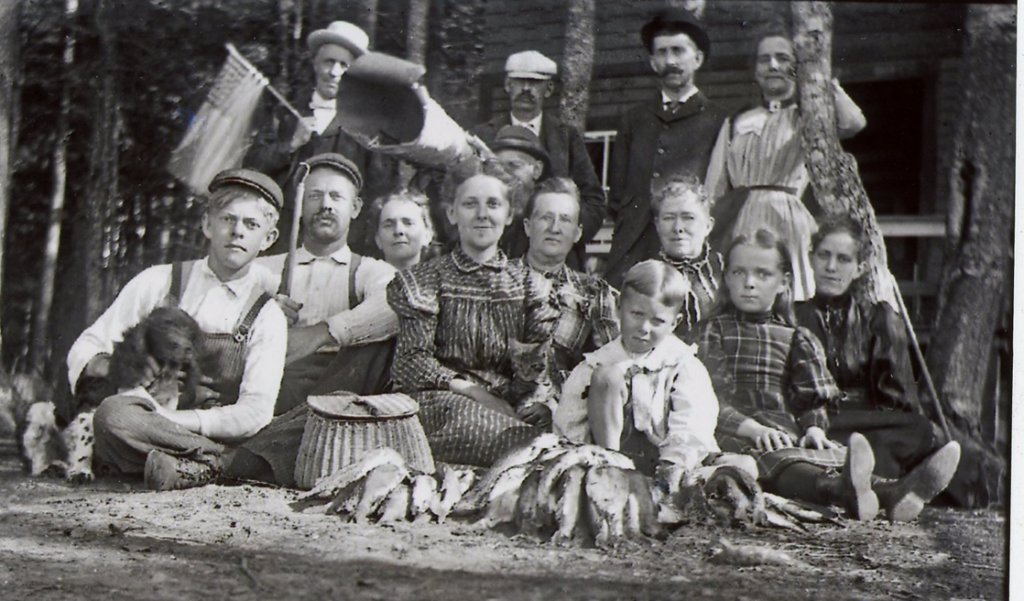 The Richardson extended family enjoying a summer gathering ca. 1891. A note accompanying the picture identifies Percy Williams and his father, Fred Williams, on the left. We recognize Nina Judkins in the plaid dress on the right, and her grandmother, Aurinda Richardson is seated behind her. Percy’s mother, Rosa Richardson Williams, is standing with her arm against the tree, and beside her stands Frank Judkins. We wish more people had been identified! 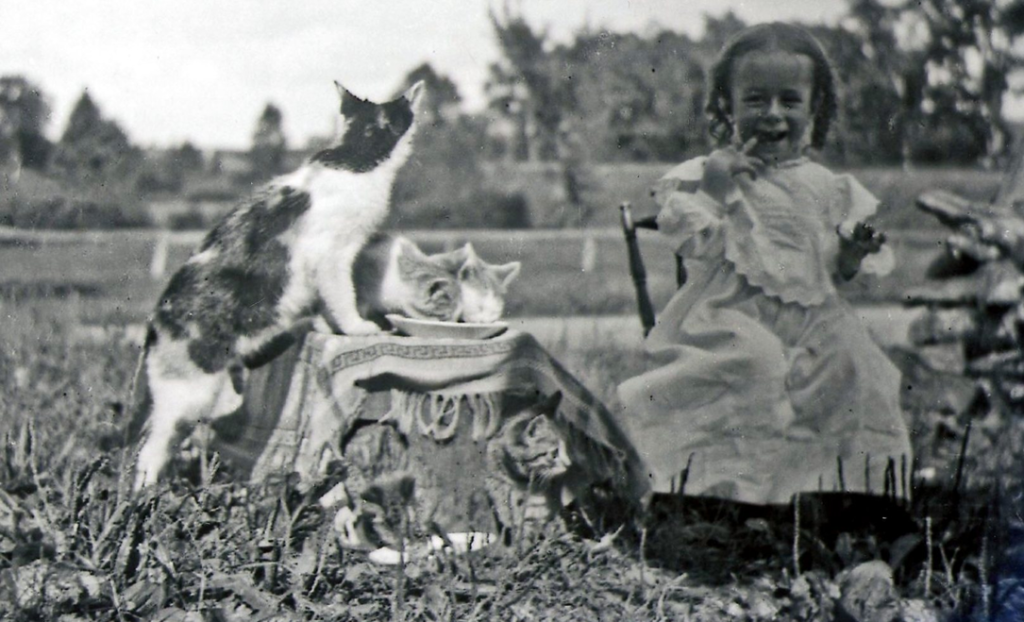 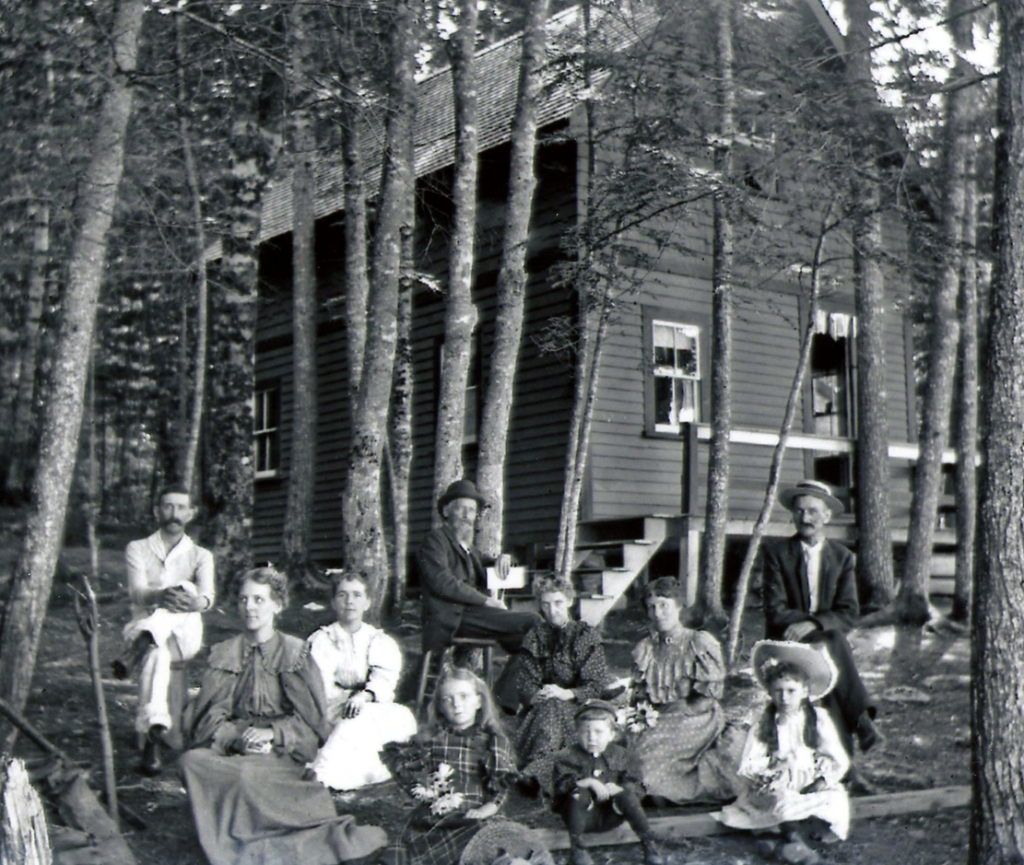 Posing for the camera in front of one of the Lakeside cottages was indeed a special occasion, since everyone is decked out in their Sunday-go-to-meeting clothes. Seated in the center in back is Charles Richardson, a much older man than we observed in the earlier tintype. Frank Judkins is on the right
wearing a straw hat, and we have no trouble picking out Nina Judkins at the front of the picture.

This collection of 19th century photographs and tintypes has given us a glimpse of a Belgrade village that thrived near the train station and Advent Christian Campground in North Belgrade in a more idyllic time. Though those images, we clearly can connect dry statistics with human faces, the homes they lived in, and observe how they clearly enjoyed each other’s company. We are grateful to Margaret McMorrow for making these pictures available to us and to future generations.